Armageddon: What is the meaning of Armageddon in the Bible?

Armageddon: what is Armageddon? 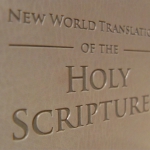 How Jehovah’s Witnesses use the term Armageddon

Jehovah’s Witnesses use the term Armageddon like mentioned above. And to refer to the war that immediately follows the gathering of the Kings of the earth. On JW.org, the website from Jehovah’s Witnesses, you can read the article “What is the battle of Armageddon?”

Armageddon explained in the Watchtower

What events will lead up to Armageddon?

In the same Watchtower article from 2019 the question “What events will lead up to Armageddon” was answered.

Armageddon in the Bible

Almost all religions will be destroyed before Armageddon

God’s word, the Bible, shows, that before Armageddon almost all religions will be destroyed. All in God’s eyes false religions. Jehovah God will use political powers to destroy this religions.

Tags for this Info about Armageddon

Coronavirus pandemic: part of the sign of the last days: Jesus prophesied pestilences